As told to Keith by his father Edward Kenny.

After basic and advance flying instruction in Texas, we went to Seymour Johnson Airfield in North Carolina for combattraining and qualification in the P-47 Thunderbolt, affectionately known as the “Jug”. As soon as we arrived, I headed to the flight line. I found the Jugs parked in perfect alignment, silent, imposing, no-nonsense war machines. I circled the first one, slowly taking in the plane we’d heard so much about. The huge radial engine with two circular banks of nine cylinders and a four-bladed propeller dominated the airframe. I inhaled the scent of metal, rubber, and machine oil and set my jaw, fantasizing this fantastic machine pulling me up through the clouds. I lifted my gaze and shook my head in disbelief. Awe swept over me—this was my war chariot. 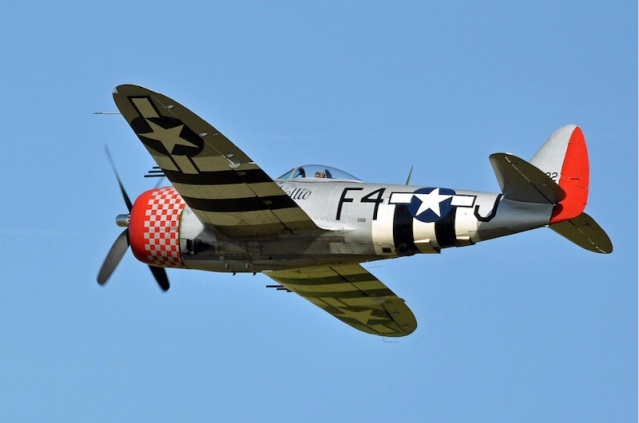 Reality struck hard the next morning and filled every minute of the next six days. Our instructors repeated all the previous training for the new fighter: ground school, cockpit familiarization and blindfold checks, simulator engine starts and taxiing demonstrations. The program left little to chance. The written tests and oral questioning were the most thorough of our training—the technically advanced Thunderbolt was far more complicated than any plane we’d flown. Republic Aircraft Corporation built the Thunderbolt in Farmingdale, New York. The Pratt & Whitney R-2800 engine with 2,000 horsepower made it the most powerful fighter aircraft ever built.

That radial engine presented one problem. When taxiing with the cowl cooling flaps open at low speeds, the big engine blocked visibility forward over the nose. This required taxiing pilots to make continuous “S” turns to see around the engine and keep the runway in view. The pre-flight briefing for our first solo flight stressed forward visibility, but with takeoff times staggered five minutes apart, I foresaw no problems.

I left the briefing determined, checked off and signed the maintenance form, and climbed into the pilot seat of my assigned aircraft. After one long breath, I strapped in, centered the seat parachute, and aligned the cushion above the pack.  I rechecked the switches, signaled my crew chief, and punched the starter.  Eighteen cylinders fired in rapid sequence and accelerated, bringing the Jug to life and driving the broad-bladed propeller to hurricane speed. In two seconds the engine rumble smoothed to a husky roar. I eased the control stick forward and felt the Jug pull off the line.

The prop wash swept a cool breeze through the cockpit. An open canopy was required for taxiing and taking off. I turned my plane into the line on the taxiway and waited for clearance. Students ahead of me ran up their engines and checked the left and right engine magnetos. At each green signal, one P-47 rolled off the head of the line and onto the runway and accelerated to take off. A couple planes shuddered, jerking left as the rpms kicked up to 2800 and the torque pulled them off center.

My heart pounded and breathing labored. Then my plane bumped forward, chattering and shaking. I heard a loud gnashing sound and swung my Jug about, pulling it off the propeller of another P-47 that had run up on my tail and shredded the control surfaces. My first P-47 solo flight never got off the ground.

The next day I felt guilty for the incident, although not my fault, and more so when I found I’d dropped to last in the checkout order. Again I started the engine smoothly and zigzagged to the line. This time, I performed the engine run up without a hitch. I waited to get the green light, lined up, locked my tail wheel, and nervously advanced the throttle to max rpm. Slowly the big warplane rolled ahead, accelerating faster then I expected. Leaning gently forward on the stick, I watched the airspeed indicator climb past 150 miles per hour then eased back.  My Jug lifted effortlessly.

Passing over the end of the runway, I pulled up the landing gear and reached back for the T-handle canopy latch. A hard pull on the T-handle slammed the canopy forward and locked it shut, which can be a tricky maneuver while keeping the plane straight and level. Swinging my arm behind my head, I snagged my elbow in the wires connecting my helmet and radio, sending them out the cockpit to be severed cleanly by the locking canopy. I was now out of communication with the tower and my instructor, but I wasn’t worried—I didn’t know it yet.

Our assignment called for six simulated landings while remaining 10,000 feet above an auxiliary field. This was to give us a feel for the Jug’s low flying and stall characteristics at an altitude high enough to recover if we screwed up. On my fourth simulated landing my landing gear wouldn’t retract. A glance to my instrument panel showed the hydraulic pressure hovering above zero. My usually cockiness drained when I realized, for the first time, that I had no communications or hydraulic pressure in an aircraft I had never landed. I reviewed emergency procedures for gear and radio. Not too bad, as long as the landing gear was down and locked, which it was, and I didn’t exceed 180 miles per hour. The radio was simpler: on approaching the field you rock your wings and watch for the green light to land. The normal approach, however, was a 360-degree turn to synchronize your landing path with other aircraft. This was tricky below 180 mph with landing gear down.

I circled the field about 1,500 feet above the traffic pattern and watched the other planes landing. When I saw a gap, I’d dive into an approach pattern rocking my wings and land. The traffic broke twenty minutes later, and I headed down. Pushing to beat the oncoming traffic, I put in too close to the runway and had to pull up and go around. I climbed back to 3,000 feet and felt good about my plane’s performance. It had the power and handled better then I expected at slow speeds.

My next approach felt good until the mobile control officer waved me off. Was I too fast? I was at the correct landing speed, 150 miles per hour. On my third attempt, I took a wider approach, lowered full flaps a mile out, and touched down in the first five hundred feet. The control officer signaled “thumbs up” as I taxied by. Back at the hangar, I logged the problems for the maintenance crew chief and headed toward squadron operations. My instructor Lt. Jim Worthy looked upset. I reviewed my experience, and he shook his head. Without speaking a word, he touched my back and walked away.

Next morning, when I saw I wasn’t scheduled on the big board, I looked for my instructor. “Lt. Worthy, sir, what’s cooking? I don’t have an assignment listed for today’s training.”

Glancing up from his clipboard, he mumbled, “Oh, yah, Kenny, today you’ll be flying with Major Johnson.”

“Yes sir.” I responded, confused. “I thought the training syllabus said we needed three P-47 solos before we flew formation.”

“The boss wants to fly with you.” This time Worthy didn’t look up.

My first reaction was excitement. Major Johnson was not just the squadron commander. In this fast war, he already had over 100 missions in the European theater and became an ace in a single day when he intercepted Junker JU-52 transports evacuating Rommel’s Afrika Korps from North Africa.

Then it dawned on me—I was being tested. This could be my last flight.