Sol Monitor. Not the challenging career step Khss was promised. The only action was on the third planet, where terrapods had spent the last sixty char perfecting self-degradation. But today’s news on the revelator puckered Khss’s gas bag.

It could mean reassignment.

In southern Virginia’s James River State Park, Kim Kenny set up his presentation for the 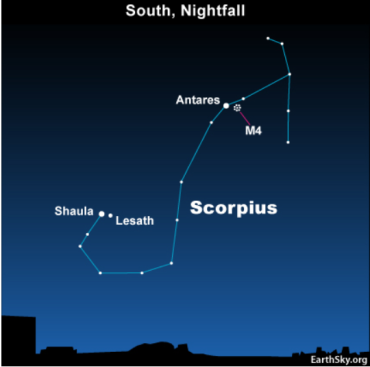 Crewe Astronomy Club. This was a public viewing, so he expected visitors in addition to club members. The sky was cloudless with a late rising moon, perfect for the night’s agenda: three planets—Jupiter, Mars and Saturn—and the globular cluster M4 in the constellation Scorpius.

Kim had observed M4 several times already this month and had saved a time exposure on his laptop. But tonight something had changed. Comparing the current image with the exposure from two days before, he saw that one of the stars had moved away from the cluster.

M4 is the closest known star cluster to Earth, yet still 7000 light years away. The movement was a nearer object, much nearer. Since he found nothing in the registry, he thought perhaps he’d found a new comet.

Kim sent the celestial coordinates to NASA’s Asteroid and Comet Watch and to the Green Bank Observatory in West Virginia. They forwarded the data to astronomers around the world. The Keck Observatory atop Mauna Kea in Hawaii confirmed their worst fears and sent out the press release:

“An object, classified as a comet, will strike the Earth next Tuesday, shortly after noon Eastern Standard Time, near Lagos, Nigeria. Twelve kilometers in diameter, the comet is expected to hit with a force of 6.2×1023 joules, half again as great as the impact that struck the Yucatan 66 million years ago and killed the last of the dinosaurs. Scientists expect only primitive life forms and those deep in the ocean to survive.”

Khss’s assistant fluoresced, “Shall we redirect the comet?”

John drew the prompt from the hat and read, “Never tickle a sleeping dragon.” It was the motto of Hogwarts from J. K. Rowling’s Harry Potter.

“I don’t think it’s dead,” said humble servant Thigtail, backpedalling and wringing his hands in fear. A massive head stretched across the cart path like a fallen tree trunk.

“It must be dead,” said Master Jones. “Why else would it be here blocking the path?” He kicked the jade-scaled head with his soft tradesman’s boot then tried pushing it with his heel. It wouldn’t budge and his boot left no mark.

“It doesn’t smell dead,” said Thigtail sniffing at a distance. “And it is unwise to disturb dragons. Best let them be, Master Jones. At Hogwarts they say—”

“Hogwarts hogwash,” Master Jones barked at being questioned. “Besides, I’m not,” he raised the tone of his voice, “tickling a sleeping dragon.” He scowled at Thigtail. “I’m kicking a dead one.” He stood high, trying to see over the head, then stooped to peer along its length.

“But why?” Thigtail pleaded. “We should leave quickly. There may be more.”

“This is why you are the servant, Thigtail, and I am the master. You have no ambition,” Master Jones said, quietly stroking his chin. “Our village is hungry. Here is enough meat to make us rich. I hear dragon scales have magic properties. The wealthy like dragon bone weapons. We’ll carve this up and sell it.” Master Jones stood erect, hands on hips and faced Thigtail. “You would have us remain poor rustics forever.” Thigtail tilted his head and shrugged.

Master Jones pointed at the jade mountain of a head. “This dragon is dead. If we walk away now, some knight—or worse, some son of a knight—is going to come along and claim he killed it. Village folk ‘ll call him a hero. ‘Oh, mighty dragon slayer, oh, great warrior, savior of our village, here have our daughters.’” Master Jones batted his hand as if swatting a fly. “We’ll be kissing his lance for the rest of our lives. Not me. This is my chance.” He pointed a finger to himself then said, “Thigtail, fetch me the shovel.”

Thigtail stretched his arm out with the shovel and ran quickly behind the cart.

Master Jones stepped onto the dragon’s claw, seated the shovel blade across one knuckle, and jumped with both feet to drive it down.

Have you ever misjudged and reached for a treasure you should not have?