As told to Keith by his father Edward Kenny

We were the Class of ’41, Lincoln High School, Van Dyke Michigan, a suburb of Detroit. Graduation was in June, seven months before Pearl Harbor, and I was seventeen.

Jobs were scarce that summer—the country was climbing out of the depression—but all my buddies from school had found some sort of work. We called ourselves the “Cherokee Club.” When I wasn’t working or visiting with my high school sweetheart, Phyllis ‘Phyl’ Bender, I met with them to play basketball or have fun. The war changed everything.

We all decided to go down and enlist in the United States Army Air Corps and become flyers. Of the 28, eight managed to pass the physical and mental tests, and three eventually qualified for flight training. Bob Schronic died the year after he was called up in a flight school accident. Bob Brown made flight officer but shifted to bombardier training.

It was several months before I got into the Aviation Cadet Program for ground school. I was called to active duty in February 1943 and shipped to Miami Beach, Florida, for Army Basic. That May I was sent to Kent State University in Ohio for Officer’s Candidate School, meteorology, and geography. There I was appointed student officer of cadets.

Phyl had written to me every day and was my lifeline throughout training. We married on campus in the chapel of Kent State University on June 27, 1943. It was a quick wedding. Her family drove down from Detroit. We got a license at the county clerk’s office. Phyl changed to her wedding dress at the back of the office, and I wore my uniform. All my buddies attended. They’d taken up a collection for a present, twenty-one dollars, mostly in pennies.

That night, we had dinner at a hotel in Dayton. Next morning after breakfast, Phyl’s family left for home. When the sergeant told me that my two-day pass had not been approved, I went AWOL for the weekend. I was back for muster Monday morning. The sergeant gave me fifty guard tours for punishment—it was worth it. Phyl took a room off campus, and we got together whenever I could get a pass.

Graduation came later that summer. After the ceremony, the sergeant handed me rail and meal tickets for the entire class of 110 students. As Officer of Cadets, I was in charge of getting us from Kent State to the Aviation Cadet Center in San Antonio, Texas. We boarded three buses for Cleveland early the next morning, everyone in crisp tan uniforms, dark ties, and brown leather jackets. We caught the Nickel Plate train that ran from Cleveland to Chicago on the Kankakee line. We were to have lunch in Chicago and change trains to head South.

We pulled into Chicago a little late, but veteran services had our lunches ready on the platform; a row of picnic tables with bags of sandwiches, fried potatoes, soft drinks, and, of course, popcorn balls, all served by pretty girls and their mothers in bright print dresses. The popcorn balls had names and mailing addresses rolled up inside—in case a soldier wanted to write a girl back home. While the cadets ate, I looked for depot number three, where we were to catch the train to San Antonio.

The stationmaster checked our tickets and boarding time then scratched under the bill of his uniform cap. “Sir, these are for the CB&Q, the Burlington train leaving Union Station on Canal Street. This is Central Station, Michigan Avenue.” 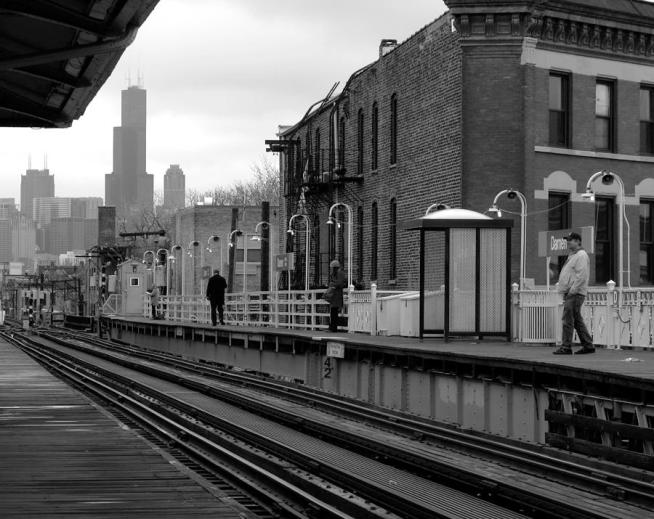 “How do we get over there?” I asked, noting the boarding time.

“You could wait for a bus, but you can’t all get on one, and it’s not due for another twenty minutes. It’s not a long walk. A little over a mile and a half.” He pointed the way. “Cross Michigan Avenue Boulevard, take 12th Street West across the Chicago River, turn right on Canal Street North. Takes you right to the Canal Street station.”

I ran back down the platform to rouse the cadets from their lunches and conversations. “Gotta march, boys. Grab your bags. We’ll finish eating on the way.” I heard some grumbling, but no one lingered. We lined up smartly and headed out two-by-two. When we crossed Michigan Avenue, the walkway narrowed and our march slowed. A Chicago policeman rode up on a motorcycle.

“Officer,” I showed him the tickets, “we’re supposed to be on the Burlington train leaving the Canal Street station at 4:40.” He nodded, waved us from the walkway onto the road then led us up the street. At the next corner, he talked to two policemen directing traffic. They jumped in a patrol car and sped off, clearing our path to the Canal Street.

We lined up four-abreast and made good time marching in the center of the road. About a quarter mile out, one of the cadets took up singing and everyone joined in.

Other songs followed. It was a beautiful sunny day. People left the shops and sang with us; some marched with us, too. Musicians pulled up chairs along the sidewalk, played, smiled and waved. We turned north on Canal, and the crowd followed. Policemen stopped traffic and waved us along.

As soon as the station came in sight, we broke into a run. By the time we reached the platform on our tickets, our train was nearly out of sight. We’d missed it.

“Whatcha got,” the stationmaster asked, waving me over. He was a short, heavy-set man in a tight, dark uniform and a billed, conical cap. I showed him our tickets, and he checked them against the passenger train schedule.

“Next train out to St. Louie ’ll be here Thursday, three days.” My face dropped and my arms fell to my sides. The stationmaster added, “Course that won’t get you to San Antone. These tickets call for switchin’ trains in St. Louie, I—” He looked at the tickets again then at a pocket watch he pulled from his vest. “Hmmm. There’s a three-hour lay over.”

He walked into the station house, cranked up the wall phone, held the speaker to his ear, and leaned into the mouthpiece. “Helen, Charlie, be a doll and connect me to the president CB&Q. Got a problem at Union Station, Canal Street.”

I looked back at my 110 pilot cadets. One played “I’ve Been Working on the Railroad” on his harmonica. Most sat on their bags or leaned on platform posts, smoking or waiting silently.

The stationmaster hung up the phone then hurried to collar an engineer and conductor coming off shift. They had a quick exchange. Both men looked at me, nodded, and ran off across the yard. The stationmaster strolled back with a swagger in his step and a wide smile on his muffin face.

“Mister, we got you a train to St. Lou. A fast ‘n, too, so you should make your connection to San Antone.”

“Courtesy of my boss, the President of the Chicago, Burlington and Quincy Railroad.” His smile told me he held something back. “You said a hundred and ten cadets?” I nodded and he nodded back. “I told the engineer to hook up five Pullman sleepers and a diner car, so you’ll be ridin’ in style.” Hearing that, my cadets cheered, jumped up, and began talking loudly. 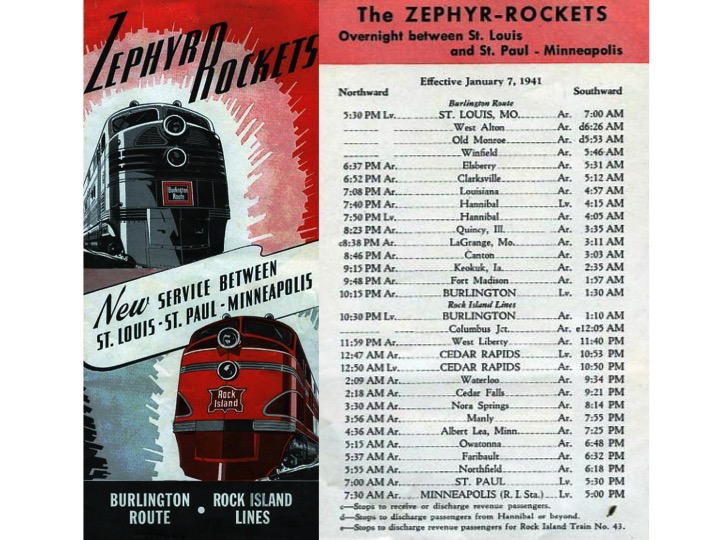 The locomotive was the Burlington Zephyr Rocket, top of the line, with seven cars attached. The conductor helped me get everyone settled in their bunks and cleared it with the diner to accept our meal tickets. We’d had a long day, so it wasn’t long before everyone turned in. I heard a long, sharp whistle, felt the train lurch, and saw the lights of the Canal Street station slip slowly past the windows.

I thanked the conductor, a tall, lean, black man who never lost his smile, then said, “Now I need to find some place to curl up.”

“No thanks necessary, sir. Come with me.” He led me to the back of the train to the last car, unlocked the door, and motioned inside. “The President of CB&Q Railroad said you was to have his personal coach.” He showed me around. It was a millionaire’s executive rail car, done up like a nineteenth-century luxury hotel room, polished brass, cut glass, imported furniture, and a full bath.

“You’ll want to say goodbye,” the conductor said, leading me outside onto the rear platform. I heard the wind rush by, the powerful chugging of the engine, and the clickety-clack of wheels running over the rails.

As the city lights receded in the distance, the conductor handed me a cold bottle of Old Milwaukee beer. “Sir,” he said, holding up one of his own.

We clicked bottles, and I offered a toast, “To your fine city, to Chicago, and to fine folks like yourself.” We drank down the beers and had a couple more.

As I looked out and listened to the clickety-clack, clickety-clack, I thought of Phyl taking another train to San Antonio. She followed me throughout my year of training, camp-to-camp, and took rooms off post.

5 thoughts on “The Yanks Are Coming”