The salon at La Rochelle was set for high tea. Light streamed in through the greenhouse windows and double doors that opened to the garden. Despite all the occupied tables, the atmosphere remained subdued. Couples conversed, ice clinked in glasses, and birdsong drifted in from the garden. The exception was a petulant robot, a two-year-old child-bot in a highchair, tended by a pair of slim young men.

Gabriella rolled her eyes. “Why bother?” she thought and checked her timer. The image of a blazing Big Ben popped into her mental display. She dismissed it. Roger was habitually tardy. She’d known that for thirty years, but he was her best source of gossip for her weekly “Insider” column.

A French-styled waiter robot rolled up on its uni-ball and served her second cup of Lacadamont tea. Gabriella dusted a pinch of cinnamon over it without tasting and stirred it with a miniature spoon. La Rochelle never got the flavor just right, but she knew her tastes were more refined than most. Gabriella also thought the robot waiter’s pencil-thin black mustache made its lipless mouth appear too severe. 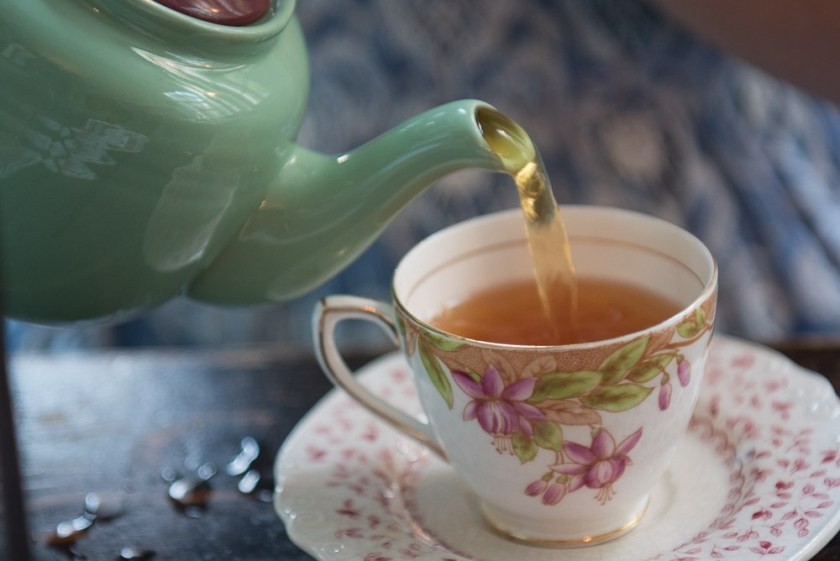 Ah, there was Roger. She spied him craning his neck over the Columbine-weaved, white lattice partition, and waved. His eyebrows rose as his mouth parted and his hand waved back. Roger looked himself: heavily rouged with ancient Egyptian, kohl-line eyes; glossy, cherry red lipstick; and raven-black hair gathered in a flowing topknot. He wore a full-length, black, satin-lapelled coat and clasped it tightly about himself, exposing only his bare calves and short-heeled, black booties.

“Wonderful to see you Gabriella … you look lovely … one week feels like forever.” They kissed past each other’s cheeks. “Is that Lacadamont … smells delish … oh, Garçon … s’il vous plait, can you bring me some of this … merci.”

“I warn you, Roger, La Rochelle does a decent Lacadamont, but you’ll have to add cinnamon.” She pointed to the spice bowl. “So, tell me, Roger dear, what is the latest news. I see you’re brimming.” She noticed he hadn’t removed his satin-lapelled coat. “First tell me, are you wearing something special?”

Roger looked sheepish. “I couldn’t find anything to fit, not after my surgery.”

“Surgery? Whatever for? You have such a fine svelte figure.”

“Well, you do know I’m trans-species. Since I meet with all incoming aliens, I want them to know I’m available for their attention.” When Gabriella looked confused, he discreetly opened then closed his coat.

“Is that what I think it is?” She blushed then elevated her tone. “How very fashionable. Of course, being avant-garde means taking a risk. Still alien genitalia are rather outré.”

“Oh, Gabriella. You are my best friend. I just knew you’d approve. Anyway,” he waved his hand, “I felt so inspired, I decided to make the change for each new species: first the Goorm, then the Boija, now the Chiri.

“A Goorm trader told me that aliens had misread the Fermi Paradox, taking it for a ‘Keep Out’ sign. Now that that’s cleared up, more aliens will be coming. So I signed up for my surgeon’s monthly plan.”

Gabriella said, “I heard more Chiri were coming. They’re replacing their scouting team with a regular full embassy. Weren’t you going to be on the reception committee?”

“Oh my.” Roger pressed a splayed-fingered hand to his chest. “Oh my stars … Yes, I was there.” He smacked his lips. “And I was sooo embarrassed.”

The French uni-ball waiter rolled up with menus. Gabriella set them aside, asked for Lacadamont refills, and gave Roger the don’t-hold-anything-back hand curl gesture.

“Well,” Roger continued, “you remember how everyone talked about the Chiri being so modern and open minded? Sure their Scout Leader was a male, but all the executives, all the flight crew, all the scientists and engineers were females, all twenty-six of them … and many were pregnant.” Gabriella nodded and accepted the Lacadamont for both of them.

“Well … the big day came last week. The Chiri ambassador’s limousine landed on the green at Tivoli. We rolled out the red carpet, very proper, very formal. Of course, our Sublime Director was there with the Grand Scientists and the Chief of the Senate. The Chiri Scouts were all lined up in uniform with their Scout Leader out front.” Roger paused, shuddering. Gabriella nodded for him to continue. He took a long breath.

“Well … the new Ambassador ran out … well … naked … down the ramp, full speed on all fours … and … well he … he spun around and kicked the Scout Leader with both rear hooves. Then he proceeded to kick him to death.”

“Oh my Lord,” Gabriella protested. “Didn’t the other Chiri stop him? How about the security detail? What did the Director do?”

“Nobody did anything. We all just stood and watched. There’s nothing in the protocol manual.” Roger paused to sip his Lacadamont then waved for Gabriella to slide over the cinnamon. “When the new Ambassador had finished kicking the Scout Leader, the other Chiri turned their backs to him.”

“Shunning him,” Gabriella said with a knowing nod.

“One might think, but no. The Ambassador sniffed them all then kicked the pregnant ones, ending their pregnancy. Then he mounted and impregnated all the Chiri Scouts, all twenty-six of them.”

“Oh poor Roger. Whatever did you do?”

“What could I do? … I applauded. The Chiri Scouts applauded. Protocol requires we not offend our guests. I just wish my Goorm friend had told me that all that kicking was standard Chiri change-of-command procedure. Anyway, you can see why I’m going to be wearing this,” he pulled on his coat lapel, “at least until my tailor finishes my new wardrobe. I don’t want to be confused with a Chiri. If I smell like a male, I’m afraid I’ll be kicked to death. Of course, I don’t want to be a Chiri female either. They didn’t even get kissed.”

“Poor dear Roger, how awful for you,” Gabriella sighed then handed him a menu. “Shall we order now? I think I’ll start with the vichyssoise then go with a Caesar.”

“Oh, that does sound lovely.”